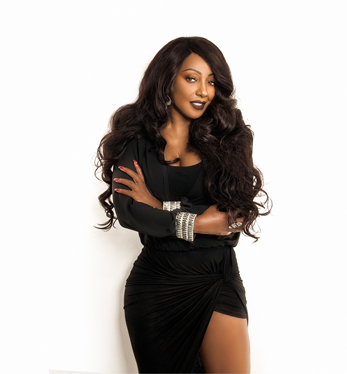 Paulette Ivory has recently appeared in Criminal Minds playing Hayden, as well as the musical 'Ragtime' playing Sarah and Blues in Night (London, 2014 with Olivier winner Sharon D Clark) playing The Woman. She is excited to now take on the role of the 'Countess' in the new musical being prepped for BROADWAY 'The countess of Storyville' beginning in Birmingham Alabama where Paulette was awarded and honored with the Key to City when playing AIDA.

Paulette Ivory has gone on to be one of London’s most acclaimed singer/ actresses. She has appeared regularly on the West End stage, TV and Film. She played the title role of 'Aida' in Elton John and Disney's AIDA on the National US tour to critical acclaim and was also nominated for a HELEN HAYES AWARD for best lead actress.

Paulette with the hit show FELA playing Sandra Izsadore. She also starred in the world tour of FELA and in the film shown at the Chinese Mann Theater LA and around the world. Paulette was recently nominated for an NAACP AWARD her role as Lutibelle in PURLIE at the Pasadena Playhouse. She played the female lead 'Nala' in DISNEY’S THE LION KING and you may have recently seen this British born actress in a recurring role on THE YOUNG AND THE RESTLESS as Vanessa Sheerer. Other TV credits include: NUMB3RS, GIRLFRIENDS, STRONG MEDICINE, DOCTORS, EASTENDERS. Film credits include: LORDS OF DOGTOWN, Danielle Steele’s THE RING. West End credits include 'Brenda' in SMOKEY JOE’S CAFÉ, 'Yum Yum' in THE HOT MIKADO, and BUDDY.

Paulette showed her versatility with the Royal Shakespeare Company playing 'Hester Worsley' in Oscar Wilde’s A WOMAN OF NO IMPORTANCE. and 'Maria' in WEST SIDE STORY. Paulette can also be heard on the hit movie FOUR WEDDINGS AND A FUNERAL. Other TV appearances include opening "THE ROYAL VARIETY SHOW" in London with the hit song HISTORY REPEATING. The British born actress celebrated a number 1 single in Japan with the band THINK TWICE. Currently Paulette is co starring in BLUES IN THE NIGHT in San Francisco with Maurice Hines, Carol Woods, Freda Payne.